For this season 2021 we introduce the use of the walkie in our kitesurfing classes and kitesurf rental with supervision. In this regard, there are always defenders and detractors of the use of this tool for kite lessons.

In this blog we detail what are the pros and cons of this tool that on the one hand can provide more security and learning, while on the other hand you get used to the student to live with the instructor always above.

POSITIVE ASPECTS OF USING THE WALKIE

We enter the matter with the aspects in favor: To begin we will avoid the unwanted screams on the beach by the monitor to the student if necessary. It should be noted first of all that the student is never yelled at. 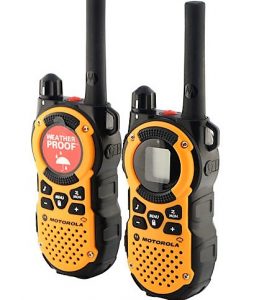 However, the wind, the helmet, the waves … mean that in a complicated situation there is no other choice and the student must be warned of any dangerous situation and instructed to release the bar or to place the kite at the zenith, if it is possible through the universal signals, which must be taught to the student on the first day.

On the other hand, in favor, the parameter of safety and confidence that is provided to the student when he is in the water since he receives more correct and precise information about what to do at all times. At the level of transmitting security to the student, it is a very useful tool, provided that the transfer of information is adequate and without interference or noise.

Likewise, in very extensive places such as the Lances Norte beach (School Zone), with students who are making supervised rentals or who are almost kiting upwind, it is convenient to put them to tell them to return to the starting point. Therefore, it generates a lot of security and precision in the classes, as long as the communication is fair and adequate.

As a negative parameter, and as we commented previously, the systematic use of the radio during the course, makes the student, once he sees himself alone and is independent, lacks the transmission of information at a given moment and is incapable of making decisions. So the student becomes a robot, who only waits for orders, but what happens when the instructor is not… 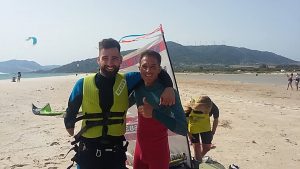 The fundamental objective of any kitesurfing course is that the student ends up being totally independent for the practice of kiteboarding. After several days of class, if he is not able to make his own decisions, because the instructor makes them through the walkie by himself. Well, the student and their ability to be independent will be less in some cases.

Likewise, in a spot like Tarifa in which many schools coexist, interference is created in the walkies. So you have to be very fine in choosing the channel and preparing the communication system.

Finally, in strong wind conditions such as an east and west waves can complicate the correct flow of information between the instructor and the student. For this reason, sometimes it does not flow well, however it can be corrected because communication equipment works better and better.

For a certain time they were without use, but in the last two they have returned with force and a large number of schools (the vast majority) use it for their courses. Our experience indicates that they are very useful and that they provide an added security, which is the most important thing in classes.

This year we bet on them !!

See you on the water!!

Kite with us!! Great wind forecast all week long!