In this article we explain the full range and types of kitesurf kites that you can find on the market. To help you in the choice of your material and that you succeed in the chosen kite.

That is the fundamental objective of this blog, to interact with you and that you also consult us. Get rid of doubts and be able to transmit all the information that we have and that you use it so that you do not fail. The content of this post may be very interesting for you whether you are a beginner or an advanced user.

A very common mistake that beginners make is to look for a kite far beyond their possibilities, since its shape or size is not correct. We help you get it right.

Kitesurfing is a very new sport. In fact, it is one of the most recent action sports and, most importantly, in continuous evolution. It began by practicing with a directional board with straps and today you can see many variants such as the Hydrofoil or kite surfing: kitesurfing with a surfboard. 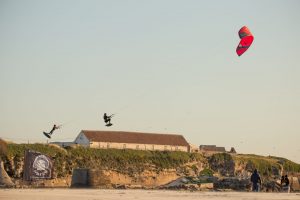 The origins of kites can be found in type C kites and they are the first to appear specifically for kitesurfing, as we know it today, back in 1997 with the WIPIKA (Wind Powered Inflatable Kite Aircraft) project by the Legaignoux Brothers. .

Its name comes from its shape in flight which, thanks to its leading edge and inflatable ribs, maintain a C shape. In the early days they were two-line kites, but fortunately they evolved to four lines or five lines that provide greater control and security. Just in that year the first models of the Wipika Classic went on sale.

The French opened the sales channel for the windsurfing brand Neil Pryde. Which made it possible for them to enter all points of sale with their 4-line kite that same year, selling 200 units. The revolution had arrived!!

A year later, in 1998 in Hawaii, the first competition of our sport took place with great success. Therefore, we can say that kiteboarding has a French father and a Hawaiian mother.

TYPES OF KITE ACCORDING TO THEIR SHAPE

Type C kites are very low wind range and direct kites, very fast and perfect for explosive turns. Many C-type kites incorporate a fifth line on the leading edge, right in the middle, to make it easier to relaunch.

Sometimes we are asked for the number of lines in a bar and this leads to confusion. We find 95% of bars with 4 lines today, compared to the 5 lines that incorporate type C. The only bars that have this greater number of lines (the central one) so that the kite turns and can be relaunched.

This type of kite has a low wind range, since having such a pronounced C shape, the wind is trapped in the walls of the kite and does not develop as much power. If you normally fly a 10 meter hybrid delta and switch to this type of kite, you will need a 12 meter for the same range.

Many manufacturers have stopped selling them because the general public does not demand them and in fact a mythical brand like Cabrinha Kites does not present the “pure C” in its product catalog for 2022.

All the manufacturers have opted for an easier option, also in 4 lines like the Open C with a greater wind range and very versatile. We recommend the Eleveight FS 2021 which is simply spectacular. An explosive kite, with a very wide wind range that improves on the C type and great if you are a more advanced kiter to do kiteloops.

This changed everything for a series of features that make it more secure. In 2005 there was a revolution in kitesurfing in terms of material, which makes it infinitely safer and more affordable for everyone. Bow kites appear!!

Bow or flat kites are distinguished in their shape and aerodynamics with respect to C. This type of kites therefore has a greater wind range and a wide depower (ability to depower). Bow kites have a system of prelines that are connected to the leading edge.

These bridles help maintain the kite’s profile in flight. They are kites of great power and great range of wind. Slower than the C, but with more upwind capacity and safer.

Bow kites are ideal for beginners in the world of kitesurfing as they have more control over the kite. Ideal for sailing freeride and for light winds. 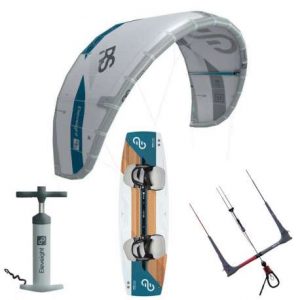 On the other hand, we find the Delta Hybrids similar, which due to their delta-type shape and the system of prelines that they acquire for their piloting make it quite similar to the flat ones in terms of depowering capacity, wide wind range, great upwind capacity…

Currently, in a busy spot like Tarifa, a very high percentage of the kites are of this type. It is a kite especially suitable for beginners due to its nobility, stability and ability to lose power when releasing the bar.

It is normally mounted on a 4-line bar. In addition, another great advantage over other types of kites is its great relaunching capacity.

In this way the first traction kites to appear on the market are the foils or air traction kites and that come from the design of the parapet. They have two panels, one upper and one lower, which are divided into several cells, which are charged with wind through the front valves.

Likewise, they have a complex system of flanges to control them. They provide a great traction capacity with light winds (light winds), but their use in water is very complicated since their difficult relaunch in the water makes them dangerous.

They are kites for more advanced and create a clear differentiation between inflatable and inflatable kites. Inflatables are more used in schools, for beginners and waves. While the non-inflatable ones are used more for foiling and speed.

EVOLUTION OF THE PRESENT AND FUTURE KITE

The progression that kitesurfing shows today makes it an extremely safe sport and is due to the improvement and evolution of kites, as well as their safety systems. 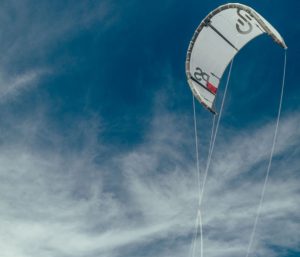 At present, as we have mentioned before, the trend is towards hybrid type kites, with four lines, very versatile, also called all terrain (all terrain) kites that are used for waves, freeride, foil… and at the same time simple.

We have realized that less is more. The success is the good construction with 4 ripstop in material, combined with 3 ribs for lightness and simplicity. This is the future of kitesurfing as far as kites are concerned in a sport in which there is a long way to go. We would love for you to know everything that comes in the future with us!!

As we indicate in KitePassion Tarifa, kitesurfing is as dangerous as the rider wants to do it, not respecting nature or extreme conditions. But as far as the material is concerned… the equipment and specifically the evolution of kites has meant a boom in the spread of this sport in terms of safety.

Kite is passion Kitesurf and kids!? Beautifull A